Anger and the Enneagram 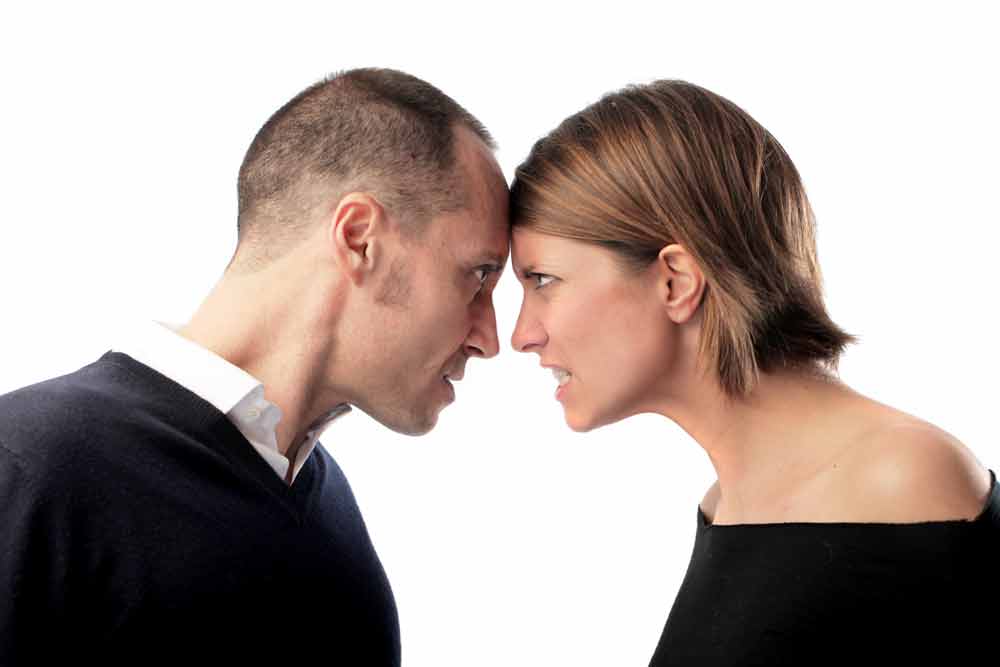 For a Type Nine like myself, anger can be very intimidating, because we Nine’s don’t get angry right? 😉 So how do we confront each Type when they’re mad? (And live to tell the tale?)

In the Enneagram, we talk about three Triads: Anger (types Eight, Nine and One), Fear (types Five, Six and Seven), and Shame (types Two, Three and Four). Does that mean only the three “Anger Types” get angry? The answer is no. It’s something that often confuses. All types get angry (or hadn’t you noticed?), just as all types feel fear and shame. The three triads indicate where we are most wounded. So types Two, Three and Four would be most wounded in the aspect of shame for instance.

Each Type has different anger triggers and will be calmed differently. How do you reach resolution, understanding and forgiveness then in each Type? (That peace thing us Nine’s are always after.) Let’s work our way around the circle.

Anger Trigger: One’s may start by being extremely polite when, in their opinion or set of rules, they feel you’ve acted wrongly. But, you know they’re about to explode, as you totter around on eggshells. They have been trying to contain their frustration and resentment, but it’s becoming hard to do. Getting angry is not a “right” course of action.

Soothing troubled waters: Allow them to explode and don’t recriminate them for doing so. You’ll find if you apologize for your part of the problem, they can quickly forgive. Gently allow them to see that everyone has aspects that are not perfect, and that it’s okay. Show them the acceptance that they battle to give themselves.

Anger trigger: Usually anger occurs when Two’s good deeds have gone unappreciated or worse still, ignored. Tired of doing for others, or they don’t get what they’re after.

When Two’s get angry, they often move to the Eight aspect of themselves. The “iron fist in the kid glove” emerges, often leaving you shocked. “What happened to the all-loving benign person?” Instead there’s an extremely angry, accusatory, aggressive person standing in front of you. I’ve known Two’s who after an explosion like this claim to have no recall of the event, or at best, to minimize it. It passes quickly for them, but may sit with you.

Anger trigger: Usually anger occurs when Three’s achievements get ignored. Three’s can become more reactive when they can’t do and are forced to be.

When Three’s tasks are unable to be completed or you’re interrupting the achievement (so that they can’t reap the acclaim), then expect fireworks. They could become extremely impatient with you, or simply opt out. They need appreciation for what they do (like Two’s). Often the very time and effort to do the work though, means that a partner feels rejected. “You’re married to your work.” The partner then may be in no space to appreciate “all I do.” Yet to not achieve (drop some of their balls), means to confront possible failure, and as a result,rejection.

Soothing troubled waters: Threes may also be unable to truly express their feelings and make try to fake good. “Forget it, let’s have fun.” You could ride with that. Being able to let them see you accept them for who they are, not what they do, (although you acknowledge that’s fantastic), can go along way to help an angry Three.

Anger trigger: Fours intensify their feelings, so annoyance quickly becomes “throwing toys out of the cot,” anger. Being seen as being boring or ordinary can also inflame them.

Fours are the drama queen’s of the Enneagram. It doesn’t take much for an average level Four to lose the proverbial plot. A little irritant escalates into a World War in seconds. In that moment, they can be very sarcastic and vindictive, yet fear of abandonment can quickly shift the anger to shame and begging for forgiveness.

Fours often sabotage relationships with their behavior. Consequently, then feel deep sadness later for having done so. “In being hurt myself, I’ve hurt so many others,” a Four confessed. Yet, Fours can quickly make you feel responsible for their behavior.

Soothing troubled waters: So how can you help them negotiate their anger? Staying calm yourself, being the solid rock they are after, can help. Don’t take their comments too personally. Show them that you love them no matter what, but don’t allow yourself to be sucked into their emotional rollercoaster ride.

Anger trigger: Not respecting their need for time alone and privacy can spark anger in a Five. Unexpected events or changes of plans can do the same. Feeling incompetent — they don’t know or have got it wrong, can trigger an explosion. Needs and dependencies — their own or others also doesn’t make them happy campers.

Five’s can be argumentative — they want to prove their point and display their knowledge and undermine yours. They have built strong mental walls and don’t appreciate the invasion of their space. Finding you reading the messages on their mobile will feel very invasive for example. Insisting they attend social functions that don’t interest them, can also be precursor to a fight. They can annoy by being physically present, but emotionally detached. Like Eights, some Five’s may actually enjoy an argument.

Soothing troubled waters: So how do you as a partner, work with this? Allow Fives time to process their feelings and anger alone. Then usually, they will emerge in a calm state to discuss any problems or even apologize. Help them feel more competent in the world.

Anger trigger: Less healthy Sixes can be highly reactive when they feel their security (in whatever form they perceive it to be), is under threat. They also get angry when they feel they are doing all the work and you’re not helping.

Six’s are often afraid of anger in general: their own and others. They may project their own feelings of anger onto another. “Why are you angry?” when it is themselves who are cross. They may be hyper vigilant, and as such expect the worst from you. Six’s may also test their own argument such as “yes, I know, but…”

Soothing troubled waters: Six need’s to feel they can trust you. So show up, work as a team and allow them to experience you as being loyal and trustworthy. That goes a long way to calming any emotional storm.

Anger trigger: Inhibiting their sense of fun or freedom angers Seven’s. When being exposed as not being as able as they believe they are (winging things) causes friction. as well as being forced into situations they view as boring. Most noteworthy, they can be impatient, and as a result get angry with those who don’t “get” it straight away.

Charismatic Sevens are fun and upbeat generally. As such, they can usually talk their way out of a heated situation, reframing the event in their favor. Then you end up apologizing for something that clearly is more their fault. Like One’s they resist criticism — they don’t want to be wrong.

This makes arguing with them difficult, as they’ll want to turn things around to favor themselves by ridiculing you. “You’re restricting me again. Can’t you just enjoy life?” They just don’t want to acknowledge the problem and get angry when forced to do so and adopt a superior stance.

Soothing troubled waters: Holding your ground and seeing their response as being their way to avoid pain can calm a situation. A partner can help bring them into what is happening now, rather than leap off into the future. Give them the space they desire and usually they will, once calm seek you out.

Anger trigger: Feeling controlled or being made to feel weak or vulnerable.

Eights enjoy confrontation. “Bring it on,” they shout. While you may be cowering, they’re wanting you to meet them head on and therefore give back what you’re getting. Because, not doing so has them lose respect for you. As a result, you become the doormat they wipe their powerful feet on. They need to feel the energy of your resistance to feel alive. Eights say it like it is and expect the same from you. Most Eights have no idea quite how scary their anger can be. “What me?”

Soothing troubled waters: So how do you deal with a raging Eight bull? They certainly don’t want to surrender the power they work so hard to maintain. While your resistance doesn’t have to come from yelling back however. Simply standing your ground and responding quietly but firmly can diffuse the situation.

Typically when Eights have had their say, they usually calm down quickly and move on. Those their anger has been aimed at might find this harder to do. Don’t allow them to do to you that which they won’t have you do to them. So pointing things out such as: “You said fighting should be fair. This is not,” can help. Agreeing to talk about things at a specific time when they have calmed down could also work.

Anger trigger: Feeling unseen and heard. They were often overlooked as children and being constantly overlooked as an adult, triggers painful feelings.

Nine’s typically say they seldom get angry. “Who me?” Even when they’re fuming they may wait for days to explode over some unrelated event. As a result they shift into passive aggressive behavior. They are the peacemakers of the Enneagram, consequently being angry flies in the face of their desire for harmony. They fear that expressing this anger will mean being cast out — being separated from those they love. Better then to not say anything and comfortably and unresponsively, numb out.

Zoning out may frustrate a partner because then Nine’s can say: “But what did I do? You’re the angry one here.” If confronted about their anger, they usually deny it. Consequently, merging with another also means that Nine’s cannot be blamed. “It was your idea after all.” “I’m accepting of you. Why can’t you accept me?” Nine’s can also get lost in the small details of the fight, rather than focus on what really is the problem.

Soothing troubled waters: Consequently, in those odd moments when it all becomes too much and they let rip, the best thing you can do is allow them to feel heard. Yelling back has the opposite effect. “I understand why that would upset you, tell me more,” can really help.